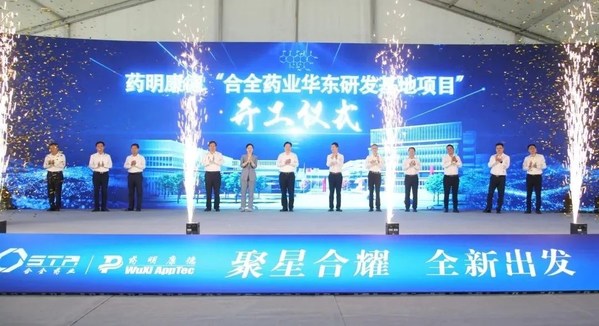 Jiangsu Governor Xu Kunlin delivered a speech celebrating the event via video, expressing his congratulations on the start of the project. He said that the Changzhou-based project of WuXi AppTec subsidiary Wuxi STA Pharmaceutical, with its view to creating an innovative pharmaceutical R&D and production base complying with international standards, is bound to inject new vitality into the province's economic growth and innovation into the local biopharmaceutical industry. The governor also looks forward to WuXi AppTec continuing to expand its presence in Jiangsu, and to invest in and launch more technology projects that are certain to spur further economic activity across the province. He expects that Changzhou's municipal government will take the lead in facilitating the next stage of technological and industrial development by accelerating the formation of regional biomedical industry clusters, making the services they can offer to WuXi AppTec and other firms in the pharmaceutical sector more robust, and assisting pharmaceutical makers in enhancing their capacity for further industrial growth and innovation.

Wuxi STA Pharmaceutical has been working on Phases I, II and III of its first project in Changzhou since 2013 when ground was initially broken. The Wuxi STA Pharmaceutical East China R&D facility will, based on WuXi AppTec's integrated, end-to-end enabling platform, invest in state-of-the-art instruments and equipment to provide innovative R&D services to its customers worldwide. The project will become one of Wuxi STA Pharmaceutical's key facilities, with plans to recruit more than 3,000 researchers and developers, creating a concentrated pool of talent, as well as to transform the industry and contribute to regional economic development. Wuxi STA Pharmaceutical plans to continue increasing its investment in Changzhou National High-Tech District and build a Phase V CRDMO project developing next-generation pharmaceuticals, with the aim of further strengthening its R&D and production capacity for pharmaceuticals ranging from small molecules to oligonucleotides, peptides and various complicated chemically coupled medicines.