Shedding light on this novel gene has helped diagnose congenital heart defects and heterotaxy syndromes, which affect 1 in 10,000 live births. 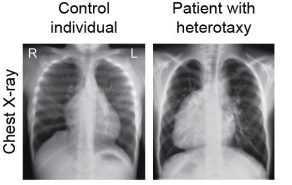 Chest X-ray of a control individual (left), with his heart pointing to the left (L), while the chest X-ray of a patient with heterotaxy (right) revealed that his heart is inversely positioned pointing instead to the right (R).

A team of researchers, led by the Agency for Science, Technology and  Research’s (A*STAR) Genome Institute of Singapore (GIS), in collaboration with A*STAR’s  Institute of Molecular and Cell Biology (IMCB) and Bioinformatics Institute (BII), and  clinicians from six different countries, has discovered a novel gene, Ciliated Left-Right  Organizer Metallopeptidase (CIROP), that is crucial for establishing proper left-right  asymmetry during vertebrate embryonic development. Babies that carry mutations in CIROP had internal organs randomly positioned, leading to severe birth defects consistent with  heterotaxy

At first glance, the human body looks symmetrical because our left side appears to be a  mirror image of the right side. This symmetry is in fact only skin-deep since our internal  organs are asymmetrically placed – the heart and spleen are on the left side while the liver  is on the right side of our body. This is governed by a set of genes – comprising CIROP,  PKD1L1, MMP21, DAND5 and C1orf127 – which act early during embryonic development  to assign each organ a stereotypical position. When this is not achieved properly, babies  can be born with birth anomalies such as congenital heart defects and misplacement of  internal organs along the left-right axis. On average, these diseases occur once every  10,000 births and are grouped under syndromes of heterotaxy.

By performing an evolutionary analysis of genomes from many vertebrate species, CIROP,  PKD1L1, MMP21, DAND5 and C1orf127 were found to be present in ancestral animals such  as fish and frogs, but absent in reptiles, birds, and certain mammals such as cetaceans.  This pattern of gene disappearance during evolution correlates with the loss of motile cilia  in the transient organ that establishes left-right patterning during embryogenesis.

Prof Bruno Reversade, Senior Group Leader of the Laboratory of Human Genetics and  Therapeutics at GIS and IMCB, said, “Our phylogenetic screen for genes that have  disappeared in vertebrate species yielded important evolutionary insights into the  development of left-right patterning. Our findings suggest that these five genes have only  one function, which is to distinguish left from right. Active during a small window in the course  of development, these genes may never be used again after birth.”

Dr Emmanuelle Szenker-Ravi, Research Scientist from the Laboratory of Human Genetics  and Therapeutics at GIS, and first author of this study, was struck that CIROP, which is such  an essential gene, had never been characterised before, “CIROP’s incomplete annotation  in the human genome prevented it from being used for diagnostic purposes via exome  sequencing. We are thrilled that this is now remedied and will immediately benefit affected  families.”

Prof Patrick Tan, Executive Director of GIS, said, “The study illustrates the power of  Mendelian genetics2 which assigns gene functions and provides indisputable causality. Birth  defects due to genetic mutations have devastating impact on both the children and their  families. These findings will serve as the basis for research on potential therapies.”