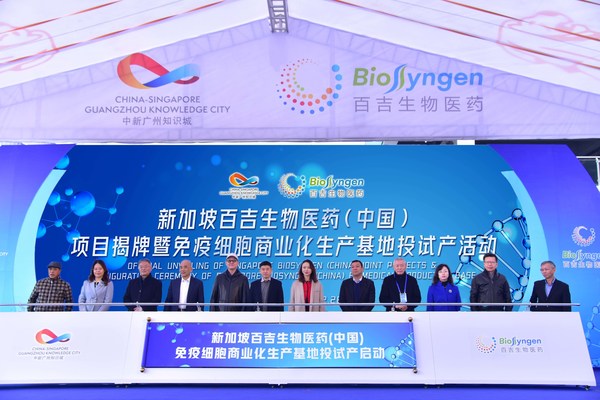 Government officials from Guangzhou Huangpu District and development district, General-Consulate of the Republic of Singapore in Guangzhou, Enterprise Singapore (ESG) attended the ceremony to witness the milestone for Biosyngen. Subsidiary bodies of Huangpu district are also invited and participated in the event.

As the largest production base for immune cells in Southern China, the facility covers an area of more than 10,000 square meters. With its phase 1 investment amounting to 200 million RMB, the facility will be designed, built and managed in strict accordance with GMP standards and customized to create fully-automated, fully-enclosed cellular drug production lines that ramps up commercialization of advanced technologies in biomedical field. The facility is on track to enable Biosyngen develop safe, effective, and affordable cell therapies benefiting patients worldwide. Moreover, the facility is expected to boost further collaboration between China and Singapore in biotechnology, ultimately making an important contribution to the development of immunotherapy and clinical research of new technologies.

Production base deployed in China and Singapore to benefit patients worldwide

Biosyngen Chairman of the board, Ms. Zhang Qiong said that the production base will be an important vector for development and manufacturing of multiple pipelines of tumor-based CAR-T/TCR-T cell therapies in China. Leveraging rapid development of the biomedical sector in Guangdong-Hong Kong-Macao Greater Bay Area, the facility will help form a biological production chain to accelerate the commercialization of scientific research achievements and improve upstream and downstream vertical integration of related enterprises, eventually maximizing positive spillovers of first-tier scientific research breakthroughs in biomedical sector in the Greater Bay Area.

Meanwhile, Biosyngen is also actively looking to expand its oversea business by planning to launch another biomedical production base, which will be targeting the Southeast and international market in Singapore by the end of 2022. Making the most of its advanced technologies and fundamental research achievements, combined with abundant clinical trial experiments gained in the fast-growing Chinese biomedical sector, Biosyngen spares no efforts to provide effective and affordable products for patients worldwide and to make immunotherapies accessible for more areas.

Ms. He Mindan, General Manager of the Science City (Guangzhou) Investment Group Co., Ltd. said that the base is designed and planned to be a comprehensive hub combining research, production, and sales. The completion of construction within nearly one hundred days fully reveals high efficiency of Huangpu district and Guangzhou Development District. The base will boost the construction of the biomedical industrial cluster worth hundreds of million RMB, thus attracting high-caliber talents. It hopefully will become a benchmark biomedical enterprise in its industry in the Greater Bay Area.

Mr. Loh Tuck Keat, Consul-General of the Republic of Singapore in Guangzhou, mentioned that the biomedical sector is an area where there is strong potential for mutually beneficial cooperation between Singapore and China. Biosyngen biomedical production base will help to promote China-Singapore cooperation in innovation, knowledge and technology and contribute positively in its sector to benefit the people of both countries.

Prof. Jean-Paul Thiery, Biosyngen Chief Scientific Advisor & Chairman of Scientific Advisory Board, mentioned that the construction of the GMP facility allows the treatment of more patients recruited in clinical trials, while its considerably diversified research infrastructure harness the immune system for targeting cancer cell. He anticipated that Biosyngen will soon be recognized as a leader in immunotherapy of cancer with its goal to provide patients with the most advanced weapons to combat their cancers and achieve long-term remission.

Mr. Liu Shi, Party member of the Guangzhou Development District mentioned that as a model project of China-Singapore collaboration, Biosyngen is expected to meet the needs of immunotherapy in China. Biosyngen will also play a pivotal role in forming a biomedical industry chain. With its cutting-edge immunotherapy products, the company will contribute to the biotechnology sector.