UK consumers will again be able to buy VIRALEZE™, an easy-to-use barrier nasal spray, from LloydsPharmacy, following its relaunch online, with instore availability to follow shortly 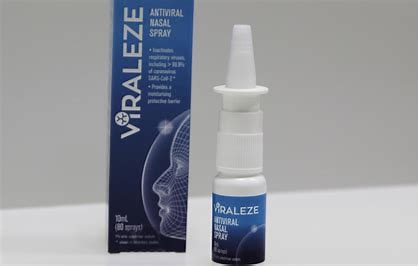 Extensive antiviral testing undertaken at the globally renowned Scripps Research Institute in the United States show that VIRALEZE™ is highly effective at trapping and blocking a broad-spectrum of cold and respiratory viruses.

VIRALEZE™ is registered in more than 30 countries worldwide and the company plans to roll the product out in more markets.

VIRALEZE™ is supported by multiple publications in peer-reviewed, international journals and data was presented at the leading, international antiviral conference, CROI, earlier this year.

Starpharma CEO Dr Jackie Fairley said, "We are delighted to relaunch Starpharma's innovative nasal spray, VIRALEZE™, in the UK through LloydsPharmacy's extensive online and retail network. VIRALEZE™ will be particularly useful in the winter cold and flu season given its ability to block and trap a broad-spectrum of cold and respiratory viruses. Extensive antiviral testing at Scripps shows SPL7013, the agent in VIRALEZE™, works against cold/respiratory viruses within 30 seconds."

Each spray of VIRALEZE™ lasts between four and six hours, and the product can be used up to four times a day before or after exposure to a cold or respiratory virus. The product is recommended for use in situations where you may be exposed to cold or respiratory viruses, such as travelling on planes or public transport, or visiting schools, hospitals or any crowded environment.

One spray into each nostril provides a physical barrier within the nasal cavity, where the density of respiratory virus attachment receptors is highest, and where viral infection most commonly takes hold.[1]

The physical barrier of VIRALEZE™ in the nasal passage traps and blocks cold/respiratory viruses, helping to reduce their adhesion, multiplication and spread – and then allowing your body's natural defences to remove the viruses from the body.

VIRALEZE™ has a number of unique advantages, including its broad spectrum, rapid onset and ability to trap and block cold/respiratory viruses either before or after exposure – providing a physical barrier to cold and respiratory viruses in the nasal cavity.

VIRALEZE™ can be found online at www.LloydsPharmacy.com and will be available in store shortly.