TCI JAPAN Launched its Breakthrough, SCIENCE OF PROBIOTICS, After 20 Years of Research

100 Billion Live Probiotics in a Bottle 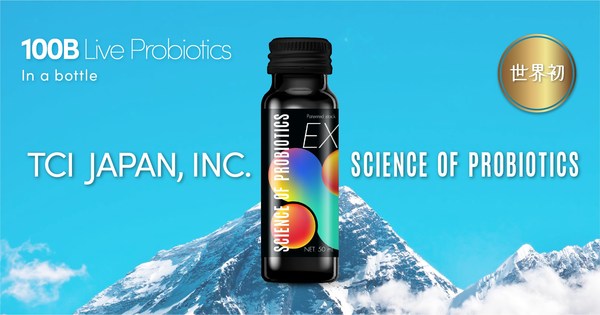 Probiotic drinks now available on the market often cannot fully exert the effect despite the content of lactic acid bacteria because live bacteria in the drinks can be killed over time or due to poor storage, which causes the numbers of live probiotics consumed by people to decrease by tens of thousands of times compared to the probiotic counts infused into the drinks. Fortunately, after 20 years of research and development, SCIENCE OF PROBIOTICS by TCI JAPAN finally broke through the existing limitations and found new ways to create innovative probiotic beverages.

TCI JAPAN's SCIENCE OF PROBIOTICS is the first in the industry to announce its development of a new patented process where high-efficiency fermentation technology is used to infuse into each tiny glass bottle of drink with 100 billion live probiotics, roughly equal to the total probiotic count in ten bottles of common lactic acid bacteria drinks. In addition, using cutting-edge technology, high counts of live bacteria can be maintained in the drinks, so that consumers can truly enjoy high-potency, quick-acting and long-acting probiotic beverages. This is an epoch-making technological innovation. In the modern age with increasing consumer awareness, Japan takes the lead in the health food industry in Asia and has successfully utilized scientific research and development to make truly good products.