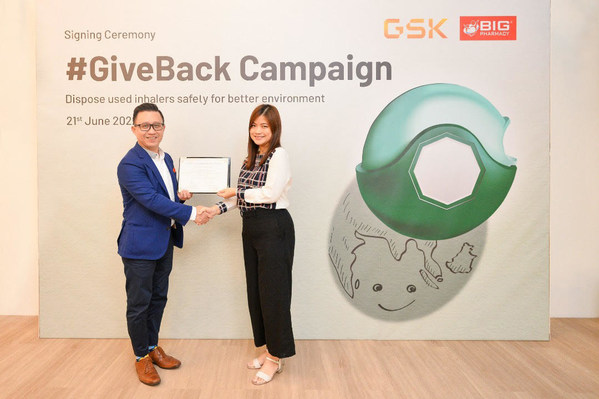 GSK Malaysia is committed to its long-term ambition of delivering net zero emissions across all operations by 2030. By striving to reduce its environmental impact, GSK Malaysia announced the launch of its very own Environmental, Social and Governance (ESG) campaign called #GiveBack, focusing on safe and responsible disposal of old and used inhalers.

#GiveBack is held through collaborative working with over 50 outlets of Big Pharmacy across the Klang Valley and Seremban and will soon be extended to a nationwide campaign. During this pilot phase of the campaign, patients are encouraged to drop off their used, unwanted or expired inhalers at participating pharmacies to help reduce plastic waste and the adverse effects that the propellant has on the environment.

In a next phase of the campaign, GSK is looking into the feasibility of having the collected inhalers recycled into materials that can be repurposed, such as materials for local artists to create art installations. GSK Malaysia is keen on collaborating with many social enterprises that share similar ESG values.

Jonathan Pan, Vice President & GM of GSK Malaysia said, "The programme has already been conducted in the UK and will help pave the way for a more environmentally sustainable treatment of respiratory diseases in Malaysia. By 2030, we hope to create an impact that results in major savings in terms of material waste and carbon emissions."

A population survey conducted in Malaysia revealed that nearly two-thirds of asthma patients (60.5%) have limited health literacy levels associated with improper use of inhalers and poor knowledge of asthma. Asthma is found to be given less importance than other long-term diseases in Malaysia such as diabetes, coupled with a lack of funding and attention from a health policy point of view[1].

The use of inhalers leaves a significant impact to the environment. Pressurized metered-dose inhalers (pMDI) with 10g of propellant can leave a carbon footprint of 13-33kg[2]. These propellants are greenhouse gases, which are a thousand times more powerful than carbon dioxide[3]. Evidence suggests that 7 out of 10 inhalers are discarded before its completely empty and majority inhalers are disposed as general waste, thereby allowing these potent greenhouse gases to leak and contaminate local water supplies, and also contribute to global warming[4].

Asthma is one of the most common non-communicable diseases in Southeast Asia. More than 73% of outpatient health clinic visits are for respiratory symptoms, among which many are asthma related[5]. It is estimated that there are between 1.6 to 2 million people suffering from asthma in Malaysia and according to the National Health and Morbidity Survey in 2011, the prevalence of self-reported or medically diagnosed asthma in Malaysia was 6.4%[5].

Mr Lee Meng Chuan, Chief Executive Officer of Big Pharmacy Healthcare Sdn Bhd shares his thoughts on the campaign. He said, "GSK's #GiveBack initiative is a very meaningful project and does more than just providing a solution for patients to responsibly dispose their inhalers. Pharmacists have a chance to discuss the patient's medicine usage and encourage them to return their used inhalers to unlock the potential for improved patient outcomes and contribute to a greener environment for everyone."

GSK topped the pharmaceutical industry for 2021 in the Dow Jones Sustainability Index (DJSI). This attests to the fact that ESG factors are an integral part of GSK's overall strategy. GSK has maintained its acknowledged leadership in ESG, and this continues to be a key driver in its goal to deliver health impact.

Having been one of the first pharmaceutical companies to set ambitious environment targets in 2010, GSK has since reduced 34% carbon emissions, 78% waste in landfills and 31% water usage. By 2030, GSK aims to reach net zero impact on climate and net positive impact on nature[6].