Discovery Technologies: The Story of Remdesivir 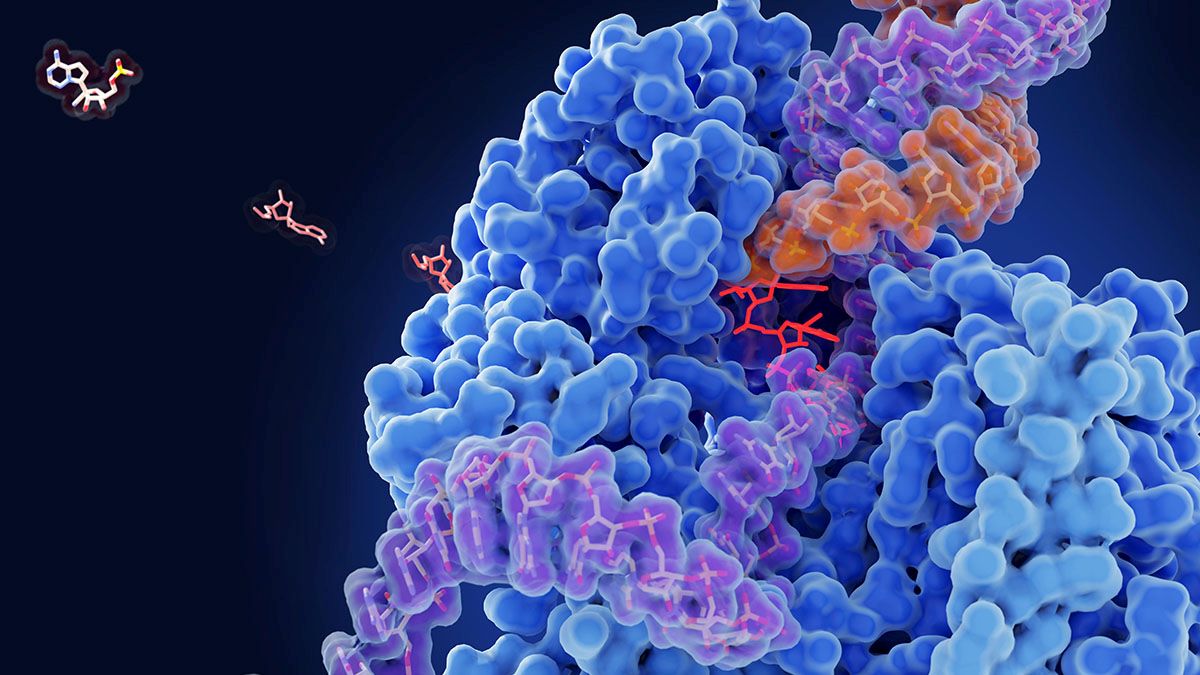 Molecular Structure and Mode of Action

Remdesivir, also known as GS-5734, is a carbolic ester with the molecular formula C27H35N6O8P. In vivo, remdesivir is metabolized into its active form, GS-441524, which is an ATP analog. GS-441524 competes with ATP for incorporation into RNA, thereby reducing viral RNA-dependent RNA polymerase activity and decreasing viral RNA production. 1This mode of action makes remdesivir a promising antiviral agent against a variety of RNA viruses.

Driven by the high unmet medical need due to the 2013-2016 Ebola outbreak in West Africa, the collaborative team set out to identify potential treatments that previously had been described to exhibit efficacy against RNA viruses. They found information indicating that a 1′-cyano-substituted adenine C-nucleoside ribose analogue (Nuc) along with its prodrug form were highly potent against various RNA viruses. 3

However, the prodrug activation showed slow kinetics; therefore, the molecule was modified to allow higher rates of the final pharmacologically active NTP in cells4. All of the generated molecules were analyzed for their efficiency of pro-drug activation in human cells using LC-MS/MS technology. Out of the molecules, GS-5734 — or remdesivir as it’s called today — showed very effective pro-drug activation. Using the Opera High Content Screening System, the researchers then set out to test remdesivir for its antiviral activity using Hela cells and two strains of Ebola viruses (EBOV Makona and EBOV Kikwit), Marburg, Bundibugyo, and Sudan viruses. Given the high hazardousness of these viruses, all viral assays were conducted in BSL-4 laboratories.

In these experiments, remdesivir showed strong antiviral activity against EBOV and Marburg virus, a finding that was further validated in other cell types and with other technologies such as EBOV GFP-reporter viruses using plate reader measurements. Additionally, other pathogenic viruses such as RSV, JUNV, LASV, MERS, CHIV, VEEV, and HIV-1 were tested with either ATP-based measurements of viral cytotoxicity on the Envision plate reader or quantifying viral load of infected cells using qRT-PCR. The findings suggested that remdesivir is effective against RSV, JUNV, LASV, and MERS, but ineffective against CHIV, VEEV, and HIV-1.

Next, ATP-based cytotoxicity assays on the Envision plate reader helped understand the cytotoxicity of remdesivir in various cell lines and primary cells and confirmed the specificity of remdesivir towards the viral RNA dependent RNA-Polymerase, as opposed to human RNA polymerases. Specificity of remdesivir was then further confirmed with in vitro experiments using viral and human RNA Polymerases and radiolabeled [α-32P]CTP nucleotides. The presence of NTP (activated remdesivir) led to premature termination of RNA synthesis only with the viral RNA Polymerase, consistent with the proposed mechanism of action.

The team next set out to analyze pharmacokinetics, metabolism and distribution in vivo, in non-human primates. To analyze the presence of remdesivir and its metabolites in blood plasma and PBMCs, blood samples were taken from the animals after different time points and analyzed using LC-MS/MS technology. To measure tissue distribution, custom radiolabeled [14C]GS-5734 was administered and following tissue isolation, tissue samples analyzed with liquid scintillation counting. Taken together, these experiments showed that once-daily dosing of remdesivir at 10mg/kg provides sustained intracellular drug metabolite levels even in sanctuary tissues where viruses might persist.

To understand in vivo efficacy, survival rates were determined among animals treated with vehicle control and animals treated with remdesivir in different doses and at different time points post infection. All animals that received remdesivir 3 days post infection survived, however, antiviral effects were greater in animals that received higher doses (10mg/kg). The antiviral effect was quantified from blood plasma samples using qRT-PCR. Finally, supported by the ScicloneG3 liquid handling station, emergence of EBOV resistant variants was ruled out by deep sequencing of the EBOV Polymerase gene from all plasma samples tested positive for viral RNA.

Taken together, remdesivir was identified as a potent and selective inhibitor of Ebola virus infection, and presented the first case of substantive post-exposure protection against Ebola.

The in vitro assay results indicated that remdesivir inhibited replication of Ebola virus and several other RNA viruses. The in vivo study showed that daily intravenous administration of remdesivir resulted in strong inhibition of virus replication and decreased mortality of Ebola-infected animals.

The positive results of the Ebola virus studies prompted other researchers to investigate remdesivir’s antiviral activity against various coronaviruses. Those studies showed remdesivir to be strongly antiviral against SARS, MERS, and the HCoV-OC43 and HCoV-229E coronaviruses that cause the common cold. One study even demonstrated that remdesivir provided prophylactic protection against MERS in nonhuman primates.2

In the meantime, the U.S. Food and Drug Administration (FDA) issued an emergency use authorization (EUA) that allows remdesivir to be used to treat hospitalized adult and pediatric patients with COVID-19. 5, 6Similarly, the European Commission granted Conditional Marketing Authorization for remdesivir to be used for the treatment of COVID-19 in adults and adolescents with pneumonia requiring supplemental oxygen.7

With clinical trials now ongoing, remdesivir pharmacokinetics and pharmacodynamics in humans is the next active area of research. Researchers of the University of Turin have recently established a UHPLC-MS/MS method using the Perkin Elmer LX-50® UHPLC system coupled with the Triple Quadrupole QSight 220® to quantify remdesivir and its metabolites in human plasma. 7, 8The researchers found the PerkinElmer hyphenated instrumentation helped accelerate their method development, an important consideration in light of the urgency of the COVID-19 pandemic.

Taken together, remdesivir provides a nice example showcasing the many ways PerkinElmer solutions are supporting the development of novel treatments. From in vitro cellular assays to in vivo toxicity and efficacy studies and eventually clinical trials, PerkinElmer provides researchers with the superior instrumentation, reagents, and software needed to move their work forward confidently and successfully.